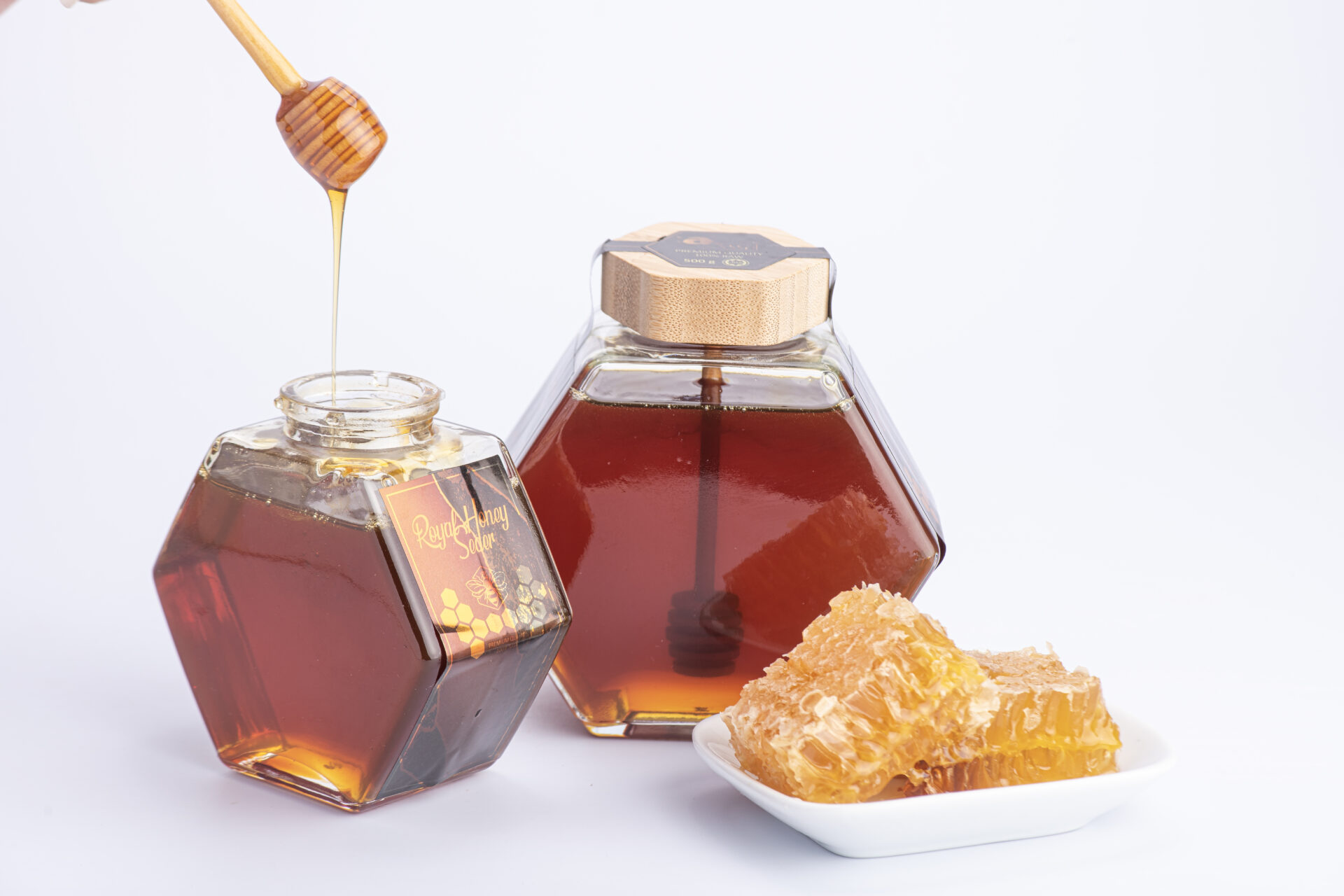 As Honey is one of the Healthiest sweet treats, shared and enjoyed by the family. Humans have prized honey for its sweet taste for many thousands of years. Some researchers say honey is more than a sweetener. It may also have health benefits, though there is little evidence for some of its beneficial uses.

Honey is composed mostly of the sugars glucose and fructose. It’s what scientists term a supersaturated solution.  When sugar is stirred into a glass of water, some sugar is usually left at the bottom. That’s because the water (solvent) will only dissolve a certain amount. But, if the water is heated, more sugar can be dissolved. Consequently, in supersaturation, heat, enzymes or other chemical agents can increase the amount of material dissolved. These solutions tend to crystallize easily. Syrup, fudge and honey are all considered to be supersaturated solutions. Because of its supersaturation and low water content (15-18%), honey is viscous. That means it is rather thick in consistency and sometimes it’s solid. Its main ingredients are carbohydrates (sugars,) but it also contains, vitamins, minerals, amino acids, enzymes, organic acids, pollen, fragrance and flavor compounds.

All honey begins with nectar. Whereas honey is viscous and has a low water content, nectar is about 80% water. It’s a very thin solution- colorless and not nearly as sweet as honey. It’s also chemically different. Through the use of enzymes, bees are able to convert the complex sugar in nectar into more simple sugars. This is why honey is more easily digested than regular table sugar. Its sugars (glucose and fructose) are simpler than sucrose (table sugar).

Because 95 to 99.9 % of the solids in honey are sugars, in order to understand honey, it’s necessary to understand sugar. Pure cane sugar is almost all sucrose. It’s called a disaccharide and is formed when two simple sugars are joined. That’s why it’s sometimes called a “double sugar.” Sucrose, which is found in nectar, is made of the simple sugars glucose and fructose. These simple sugars are called monosaccharides, which means “one sugar.” Even though fructose and glucose have the same chemical formula (C6H12O6), they’re two different sugars. That’s because their atoms are arranged differently. This difference in atomic arrangement, makes fructose taste much sweeter than glucose. Honey is also slightly sweeter than table sugar, because honey contains more fructose.

Honey bees don’t just gather the nectar, they change the nectar chemically. They produce an enzyme called invertase in their salivary glands. Enzymes are organic compounds that speed up a biochemical reaction. These enzymes are not used up in the reaction, so they can be used over and over again. After the nectar is gathered by the bee, invertase is added. This enzyme helps change sucrose into equal parts glucose and fructose. It’s the beginning of honey. Other enzymes also help honey taste better. Amylase is an enzyme that helps break down amylose into glucose. Glucose is easier to digest and it’s what makes honey sweeter. Another enzyme, glucose oxidase, then breaks down the glucose and stabilizes the pH of the honey. Catalase changes hydrogen peroxide into water and oxygen. This keeps the hydrogen peroxide content low. (Even though some people believe that the hydrogen peroxide in honey is what helps preserve it, it’s probably due more to its slightly acidic pH and low water content.)

There several convenient most effective healthy benefits about honey:

1. Contains a Variety of Nutrients

Honey is essentially pure sugar, with no fat and only trace amounts of protein and fiber. It contains small amounts of some nutrients, but most people typically don’t consume enough honey for it to be a significant dietary source of vitamins and minerals.

Antioxidants help neutralize reactive oxygen species (ROS) in your body, which can build up in cells and cause damage. This damage can contribute to conditions like premature aging, type 2 diabetes, and heart disease.

As such, many of honey’s health benefits are attributed to its antioxidant content.

3. The best for blood sugar Regulations

When it comes to blood sugar management, honey may offer some slight benefits over regular sugar.

Although honey raises your blood sugar level just like other types of sugar do, the antioxidants it contains may help protect against metabolic syndrome and type 2 diabets.

Researchers have found that honey may increase levels of adiponectin, a hormone that reduces inflammation and improves blood sugar regulation.

However, while honey may be slightly better than refined sugar for people with diabetes, it should still be consumed in moderation.

It’s also important to know that certain types of honey could be diluted with plain syrup. Although honey adulteration is illegal in most countries, it remains a widespread problem.

Honey may also help prevent heart disease. According to one review, honey may help lower blood pressure, improve blood fat levels, regulate your heartbeat, and prevent the death of healthy cells — all factors that can improve your heart function and health. One observational study including over 4,500 people over age 40 associated a moderate honey intake with a lower risk of high blood pressure among women.

Plus, a study in rats promisingly showed that honey helped protect the heart from oxidative stress.Additionally, raw honey typically contains propolis, a type of resin that bees produce from sap-producing trees and similar plants. Propolis may improve cholesterol and triglyceride levels

Topical honey treatment has been used to heal wounds and burns since ancient Egypt. The practice is still common today.A review of 26 studies on honey and wound care found it most effective at healing partial-thickness burns and wounds that have become infected after surgery.

6. May help suppress coughing for children

Coughing is a common problem for children with upper respiratory infections. These infections can affect sleep and quality of life for both children and parents.

However, common cough medications are not always effective and can have side effects. Interestingly, honey may be a good alternative, with evidence indicating that it’s an effective treatment option.One review of several studies on honey and cough in children found that honey appears to be more effective than diphenhydramine for cough symptoms. It may also help reduce cough duration. Another review noted that it may also improve sleep quality among children with coughs, as well as their parents. Further, unlike some cough medicines, honey doesn’t have any side effects. However, never give honey to children under 1 year of age due to the risk of botulism

7. Good supplement for your diet

Honey is easy to add to your diet.

To get a small boost of antioxidants from honey, you can use it any way that you’d typically use sugar. It’s excellent for sweetening plain yogurt, coffee, or tea. You can also use it in cooking and baking.Also, keep in mind that honey is a type of sugar, so consuming it will cause your blood sugar levels to rise. Plus, eating large quantities of honey, especially consistently over a long period, can contribute to weight gain and increase your risk of diseases like type 2 diabetes or heart disease. Therefore, stick to a low-to-moderate intake.

Things You Didn’t Know About Honey